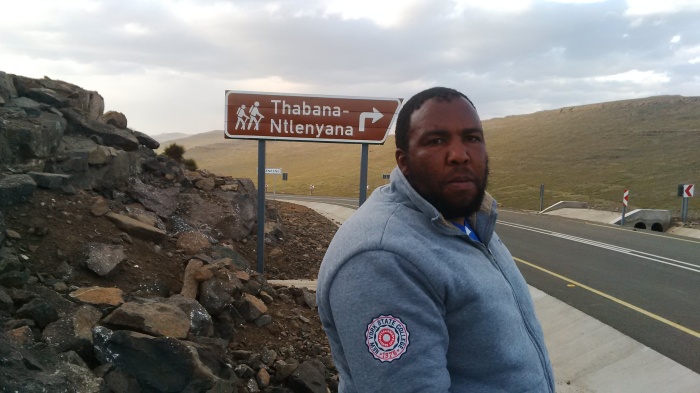 The team was ferried to the Drakensberg range of mountains in the safe hands of Chief Mahlasinyane Molefi, for them to saddle up and cycle to the mountain summit, Saturday and through the Sani Pass, Sunday.

Mr Lethusang Ntili, standing, of Federation of Cycling Lesotho is planning to take Lesotho MTB riders to Sani Pass for a test of endurance race, from Himeville, Kwazulu-Natal to Sani Top, Lesotho, sooner rather than later. for further details call him on his mobile +00 64104555.

Here Mr Ntili is seen looking into the gorges of on of the most famous mountain passes, that attracts thousands of tourists from all over the world, particularly, from Western Europe and the USA.

My 63 years old feet carried me for eight hours to and from the summit of Thabana Ntlenyana 3482m along the Drakensberg Mountain Range. I thank God for giving me the rare opportunity of praying up above the highest mountain peak, in the whole of southern Africa.

As I was busy, making arrangements leading to picking up a phone to call the RSVP number on this card, excited that my living legend Bra Dizzy, one of Lesotho’s piano maestros and cartoonist of note is about to turn 70 years. 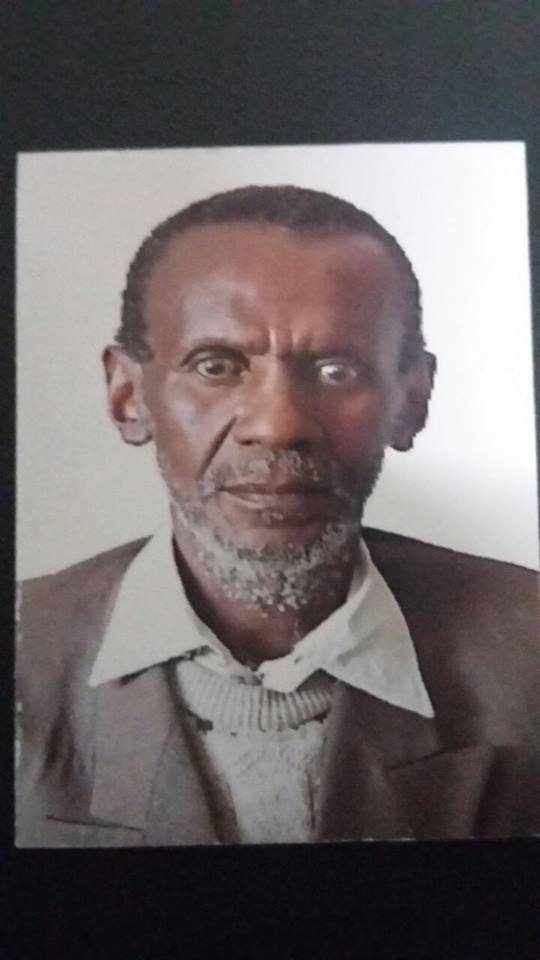 For some reason, I visited my facebook account to hear the latest news and gossips. Then, a bomb shell dropped on me. Bra Dizzy’s younger brother Rev Fr Maieane Khaketla came up with a pill, that was very hard to swallow: “Sechele Honey, Dizzy Khaketla is dead.” Can you imagine.

The post read: “This morning at 7.00am my dearest brother and friend, Sechele “Dizzy” Khaketla aka “Honey“, was called to higher service. He will be sadly missed, and fondly remembered for his music genius and his witty sense of humour. He will be laid to rest at the Kokobela Cemetery in Maseru West on Friday the 21st October, following a service at the St. James Anglican Cathedral at 9.00.”

Bra Dizzy was the first child in a family of the late Bennett Makalo Khaketla and ‘Masechele Khaketla, both, authors of many classical and educational books. Mrs Khaketla was also responsible for the education of most senior civil servants and cabinet ministers in Lesotho, including Mohato Bereng Seeiso, the reigning king of Lesotho in the name of His Majesty Letsie III.

His dad, BM as he was fondly referred to, was also a staunch opposition leader who stood up against the brutal and repressive regime of Chief Leabua Joseph Jonathan who ruled the mountain kingdom with an iron fist for 20 solid years (1966-1986.) Mr Khaketla wrote and published a book, that detailed the brutalities of Jonathan, it was wildly circulated internationally, while banned in Lesotho. “African quo under a microscope: Lesotho 1970 was its name.”

Despite his parents academic and political prowesses, Bra Dizzy followed his stars, playing piano in church and at club houses in the capital of Lesotho, Maseru, and caricatured and cartooned different subjects. This is one guy to be mourned.

Like Loading...
Most people get into various jobs for various reasons, not to contribute towards the development of the job they have applied for.
Most people get into marriages for various reasons not be because of love of each and and eternal committment.
It goes without saying therefore, that most people go into politics for various reasons; not to serve the nation based on the national constitution.
The same is true with most civil servants, police, army, clergy, parents, children etc etc.
Indeed, most people are liars, especially Basotho, otherwise our kingdom wouldn’t be in this sad state: physically, economically, politically, morally etc etc.. 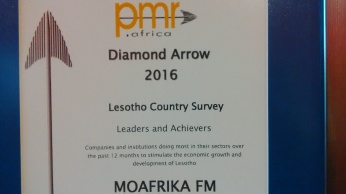 MOAFRIKA FM RADIO was established in 1999 for the purposes of empowering the lowly placed members of society in a manner that they may be able to participate in government and national economy, meaningfully.

Already, the station can boast more than ten Members of Parliament who couldn’t have been elected had it not been of the publicity the radio gave them at no cost at all. On the economic front, MOAFRIKA FM RADIO Has created a good number of millionaires.

It is the hope of the management of MOAFRIKA FM RADIO that serious businessmen and women shall deem it fit for their corporations to promote their enterprises through the country’s most popular station.

US politician Mr Donald Trump on the left and Lesotho PM, Dr Pakalitha Mosisili, MP on the right.

The power of the social media has brought the American election campaign into the households of every Mosotho, the natives of the Kingdom of Lesotho to the point that some families are torn between Mrs Hilary Clinton and Mr Donald Trump.

On talk radios, one would even hear people referring to each other, or to some local politicians as either Mrs Clinton or Mr Trump. Some do so in admiration of either candidate or as a scorn.

The negative publicity that most social media is projecting into the tiny kingdom about the Republican Party’s candidate is taken as strength on the side of Trump. For instance, there are those who agree with the man that some political leaders in Africa do not deserve their positions, and that, if Trump’s success would mean blacklisting them, that will be fine with them.

They also agree with him that some welfare programmes perpetuates laziness amongst the citizenry. It should be stopped forthwith. They say, his argument was first developed by the Italian politician of old, Mr Marcus Cicero. It holds water.

Mr Khotso Letsatsi and the offices of the Lesotho Communications Authority.

Mr Tseliso ‘Mokela, CEO of the Lesotho Communications, Wednesday, ruled that a team of experts from LCA, (the regulator and licenser of radio and television as well as telecommunications corporations), MOAFRIKA FM and Lesotho National Broadcasting Services should tomorrow Thursday travel to Leribe to thoroughly investigate the interferences into the running of MOAFRIKA FM RADIO, Lesotho’s leading private radio station.

This after MOAFRIKA FM RADIO complained to the minister of communications,   Mr Khotso Letsatsi pictured above, about the interference into their programmes from a local radio stations, an activity that seems to be a secret deal between the said station owners and the engineers of the Lesotho National Broadcasting Services.

The same interference is experienced in the southern district of Mafeteng some 88km out of the capital Maseru as well. The head of LNBS Mr Dada Moqasa wasn’t even aware that, the alleged radio is stealing electricity from the compound housing the government owned and controlled Radio Lesotho.

The investors’ agents’ concern that The Ministry of Trade and Industry are failing in their mandate to, speedily register companies and licence them has been corrected.

The Director of One-Stop Business Facilitation Centre (OBFC), Tuesday morning called the author, and told him that a hiccup that had been preventing them from registering certain companies has been cleared, he may come and apply.

Mr Mpho Malie, former Lesotho Minister of Trade, once told the author that his time in government has taught him how to work with government, a thing that most people are ignorant of and end up discouraged, due to a long red tape.

It is the very knowledge of how government of Lesotho operates that has assisted the author to end up with an answer, that has opened a door for a lucrative investment opportunity, that nearly escaped the impoverished kingdom.

In the previous government, Lesotho lost a US$30m investment opportunity in the area of wool scouring that would further produce lanolin and woollen by-products, for the country to become the only African country to produce and export first grade linolin.

The Director of OBFC have nevertheless told the author that they are struggling with their systems, which should up in a few days time.

My first lesson on a motorbike has been going very well. My instructor says I’m doing far better his widest dreams compared to his previous students, taking my age into consideration.

Taking-off is the most difficult, to me at least. We have agreed to put more time and effort on that one, then try others, such as gear shifting.

He tells me the first day is in fact, always the toughest, as it is filled fear and anxiety. Apostle Paul, I says: “I can do all things through Christ who strengthens me.” And do I.

I thank you for your prayers and good wishes.